Wedding Entertainment: How Not To Do It 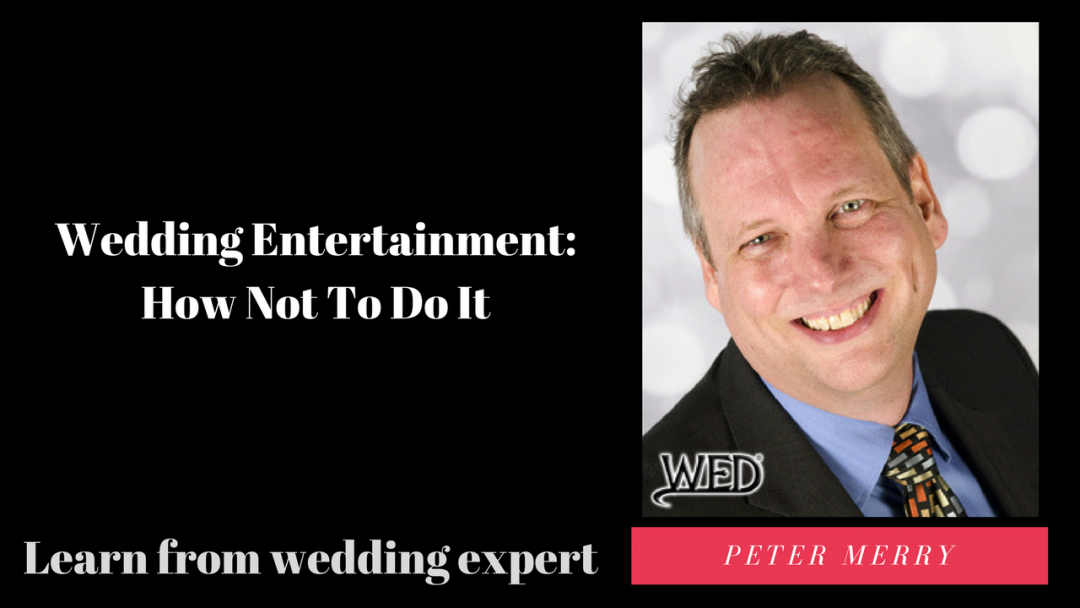 Wedding Entertainment: How Not To Do It

Remember Goofus And Gallant? They were little two-panel columns in Highlights Magazine For Children that compared Goofus’s ill-mannered boorishness with Gallant’s, well, gallantry. Here’s an example. I always thought Goofus’s parents sort of put him behind the 8-ball by naming him Goofus, but that’s for another article.

The point is, even Goofus will probably get married someday, and with the help of Peter Merry, who was kind enough to sit down with WeddingPros.TV for an extended interview (here’s part 2), we can avoid all the ways Goofus would make entertainment choices for his wedding a disaster.

It’s not a stretch to say Peter Merry is the country’s preeminent Wedding Entertainment Director. Indeed, he coined the term and runs its industry governing body. What you may think of as just “DJ” or “Emcee,” he is that, but far more than that, and the best there is at it.

Ready? Welcome To The Goofus Wedding!

1 || Goofus Makes No Distinction Between DJ And Emcee.

More to the point, Goofus treats the announcements and hosting duties a DJ performs as an afterthought, and only thinks about the “DJ” portion. He just thinks about people dancing to good music, and that’s it.

Therein lies the problem. “Brides and grooms hire a DJ who they think will play music and get people dancing, and they’re not thinking about the fact that this person is going to be on the mic,” says Merry.  I heard a story about a DJ making a joke during the cake cutting about his three ex-wives.”

The announcement and speaking portions of the entertainment’s tasks are crucial, and you want to make sure you get an emcee who can handle those parts of the job with grace and aplomb, with no inappropriate jokes, stammering awkwardness, or cold monotones. The way to do that is get a proven entertainment director.

2 || Goofus Puts A Pittance Of The Wedding Budget Towards Entertainment.

“When it comes to the budget concerns, here’s what you need to ask yourself: on a scale of 01-100%, how much do you think the right entertainment will contribute to the success of your wedding reception?” asks Merry. He says that everyone answers that question with at least “80%,” but no one gives 80% of their reception budget to the entertainment director.

Well, why not? The reason most people say 80% or above is because they (correctly) intuit that a great DJ will be the biggest factor in determining whether people have a good time or not (besides the bride and groom themselves – more on that in a bit). Missing floral arrangements, photographers stuck in traffic, mediocre food – ALL of that can be overcome with a good time, and a good entertainment director is a master of creating a good time. Budget accordingly.

3 || Goofus Has Creative Entertainment Ideas (Or He Stole Them From Gallant), But Knows He Can’t Pull Them Off And Settles In For A Cookie-Cutter Reception.

Here’s another area where a good entertainment director works wonders. “Creative” reception plans may simply mean doing things that would be orthodox for the ceremony on the East Coast that is nigh unheard-of on the West Coast (things like the order in which eating and dancing takes place during the reception, for example).

“If you want to do something outside the box, it’s going to be very important to have the right kind of emcee who can help you not only design it, and place it in the agenda in the right place, but also sell it and enlist the guests’ support for it.

“If you don’t have someone who knows how to do that, those kinds of ideas can fall on their face.

“Just getting on the mic and saying, ‘Everybody dance!’ Not going to work. Just about as helpful as going, ‘Hey, I’m at a comedy club. Everybody laugh!’ Doesn’t work.”

In other words, a good emcee is a good conduit between your ideas and the receptivity and readiness of your guests. Don’t discount that.

Goofus Spends Much Of His Time At The Reception In The Basement Playing Pool With His Uncles.

Okay, maybe not that. But vanishing brides and grooms are not unheard of at receptions, and that’s bad.

“If you as the bride and groom check out – brides and grooms who are smokers, who are not as social, who aren’t much dancers – if for any reason you’re not a part of that celebration, people will start to lose interest, because they’re there for you,” says Merry.  “When they see you as part of the celebration, especially if you’re on that dance floor, guess where they’re gonna be? Right there with you.”

Makes perfect sense when you frame it that way, right? Brides and grooms slip away for one reason or another, and the unifying catalyst that bonds everyone there is suddenly gone. That doesn’t just create a lack of interest, it creates anxiety for a bunch of strangers whose only commonality is, for the moment, AWOL.

So duck out as sparingly as you possibly can. It’s what Gallant would do.

If you are interested in hiring Peter Merry for your wedding, Eric Herod Entertainment is proud to say that Peter is available through our company.
If you want more tips on how to make your wedding something the guests will talk about for years, sign up for your FREE copy of 3 Things You’re DJ won’t tell you about how to take your wedding from average to Legendary!
Then, make sure you come back here and…

Corona Monday Mix @My Studio (not for kiddies)
A mix of hip-hop with a little rock and ending with a tribute to Fountains of Wayne lead singer, Adam Schlesinger, and the great Bill Withers.
mixcloud.com
View on Facebook

Eric Herod Entertainment
A little mix of Hip-Hop Love songs remixed by me and then mixed together. This one is for my boy Al, who requested all of these songs.

The Little Hip-Hop Luv Mix @My Studio
A little mix of Hip-Hop Love songs remixed by me and then mixed together. This one is for my boy Al, who requested all of these songs.
mixcloud.com
View on Facebook

I'm Corona'd (Stay Home) Mix
Here's a mix of a bunch of songs that would probably be a set from my regular Friday gig. If we weren't stuck at home.
mixcloud.com
View on Facebook

Eric Herod Entertainment
What song is she singing along to? 🤔🤣

Find out the 3 Secrets Your DJ Won’t Tell You!